(Bourne, MA) – In July 2017, Congressman William R. Keating (D-MA 9th) joined local and state officials and affordable housing supporters for a groundbreaking ceremony to kick-off the third and final phase of a mixed-income housing project that has brought a total of 117 new units to the town of Bourne in less than a decade.

A little more than a year later, the Congressman, officials and supporters returned to Bourne to celebrate the completion of that project, High Meadow Townhomes, a newly-constructed 44-unit building that is a blend of two- and three-bedroom townhomes for families and seniors in a residential community off MacArthur Boulevard.

“These residences will be a success story that will drive not only a more successful Bourne community, but something we need on Cape Cod as well, said Congressman William Keating (D-MA). “There is a great need in our region for housing – for younger people, people who are starting families, [workers] who are needed to fill the jobs in this area and grow our economy forward.”

The demand for this type of housing was witnessed this summer when Housing Assistance Corp (HAC) of Cape Cod received more than 200 applications for the 44 units at High Meadow.

“The completion of High Meadow Townhomes is vitally important to meeting the need for more rental housing on Cape Cod,” said HAC CEO Alisa Galazzi. “With over 200 people applying for these townhomes, it’s apparent there’s a huge demand for this type of housing. I’m proud that our agency was able to partner with POAH to help address this critical need to make a meaningful impact in the lives of these 44 families.”

“This development is the perfect example of what great things can happen when federal and state resources are combined with local support and private investments to create not just buildings, but a real housing community,” said POAH President and CEO Aaron Gornstein.

Long before the project began, the site was intended to be used as an office building for a high tech company that decided not to develop the parcel. Businessman William Zammer of Mashpee purchased the property, eventually agreeing to sell the 19 acres of land to HAC to develop as rental housing.

HAC partnered with POAH to create the phased-in housing to help Bourne address the shortage of rental housing in its community.

The two nonprofits took a thoughtful approach to the environmentally-sensitive nature of the site, which is in close proximity to the Phinneys Harbor watershed. During the second phase construction of Clay Pond Cove, a wastewater treatment plant was built that serves all three buildings as well as the abutting retail shopping center which once housed a supermarket.

POAH Communities, which oversees the management of the Residences at Canal Bluffs and Clay Pond Cove, will serve in a similar capacity for High Meadow Townhomes.

JANEY, Inc. of Boston served as the general contractor for the $14.1 million project which was made possible through $7.6 million in 9% low-income housing tax credit from Boston Capital along with a $3.3 million loan from MassHousing and funding from Community Economic Development Assistance Corporation (CEDAC), the Department of Housing and Community Development (DHCD), Barnstable County HOME Consortium, Rockland Trust, and MassHousing’s Opportunity Fund.

High Meadow consists of a mix of 2- and 3-bedroom townhomes that are equipped with Energy Star appliances including  refrigerator, oven, and dishwasher.  All units have vinyl plank flooring, ample closet space, central air conditioning, and washer/dryer hook-ups. The site has 64 outdoor parking spaces (approximately 1.5 per unit), on-site laundry, and out-of-unit storage. 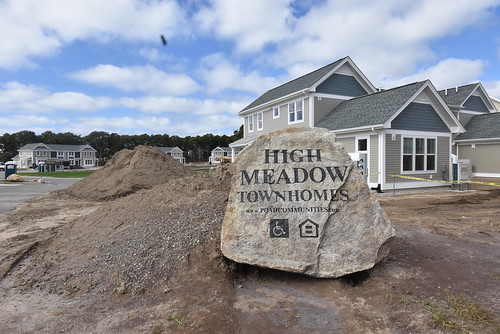